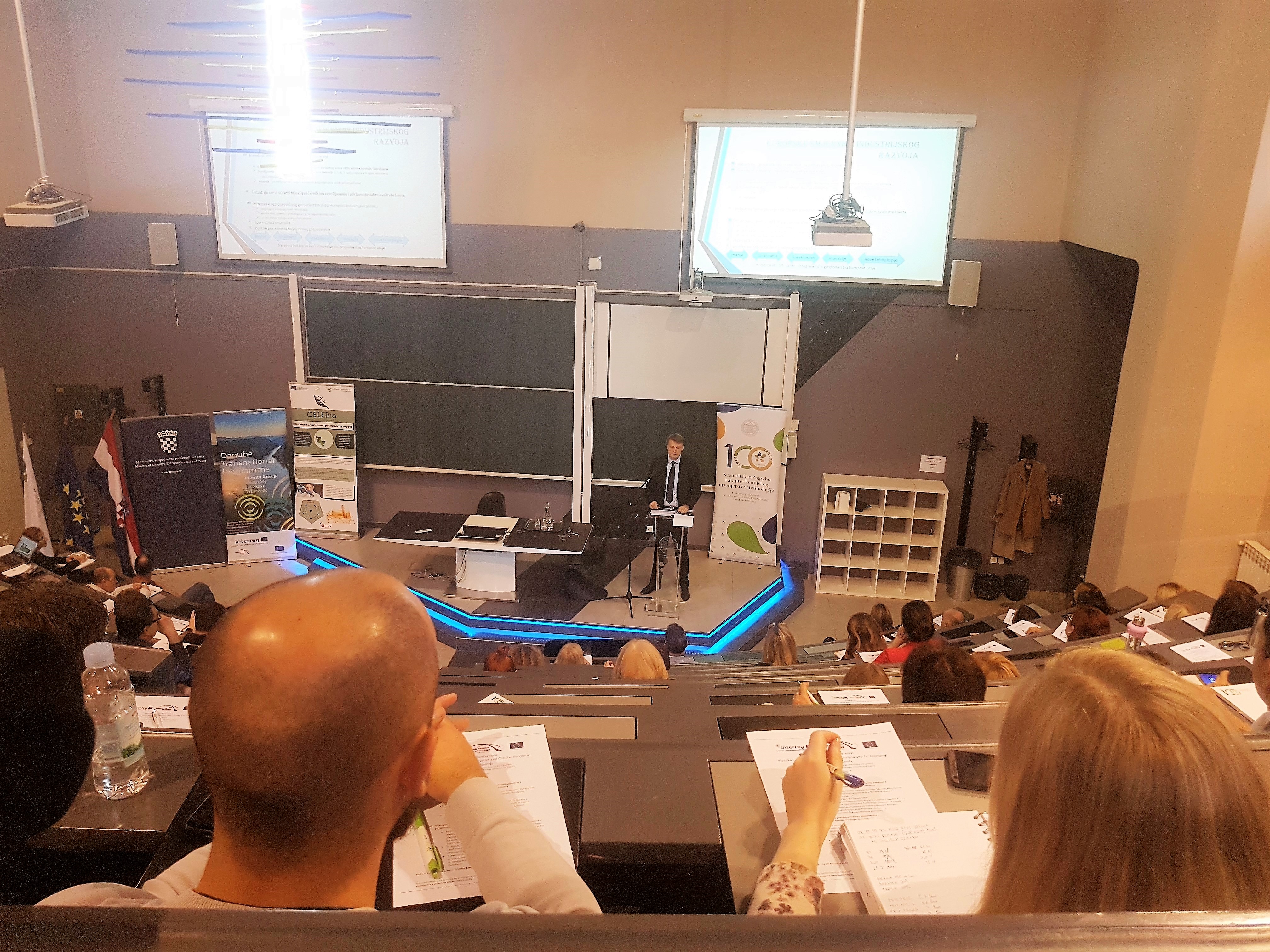 In organisation of the Ministry of the Economy, Entrepreneurship and Crafts and the Faculty of Chemical Engineering and Technology, a conference titled “Plastics and Circular Economy” was held today at the Faculty of Chemical Engineering and Technology. There was approximately a hundred representatives of SMEs, scientific community and of national policies present at the conference. The aim of the conference was to introduce the SMEs with changes in the legislation on plastics and circular economy and to show with good practice how this change may be reflected in the business community.

Prior to the opening of the conference, Assistant to the Minister of the Economy, Entrepreneurship and Crafts Zvonimir Novak welcomed the audience. On this occasion, Mr Novak said that Croatia has been following the European policy that sees industry, especially in terms of the circular economy, as a holder of the economic stability and innovations, and thus as the initiator for strengthening of the Croatian economy.

He also presented the incentive measures of the Investment Promotion Act, as well as other legal frameworks enabling investments in research and development projects. „Namely through research and development of the new, innovative projects we would like to help entrepreneurs so that they could improve and develop the economy with their ideas and projects, thus ensuring sustainable development of the economy with resources, as well as to extend the life-cycle of the materials and products. By strengthening the economy, we ensure economic growth for which we hope that it will simultaneously follow the EU policy targets such as reducing carbon emissions, increasing energy efficiency, ensuring access to resources and at the same time reducing negative environmental effects as well as greenhouse gas emission,“ said Mr Novak.

He especially emphasised the importance of the European funds for the industrial development. “We are aware of the fact that entrepreneurs sometimes wait too long the results of a tender and they sometimes are not happy with the results, but I must say that the colleagues have been continuously working to accelerate and simplify tender procedures. Finally however, I am sure that all quality and properly prepared projects in the end receive requested funds. A proof of that is 31 invitations for tenders, with a total value of HRK 7 billion, announced by the Ministry of the Economy, Entrepreneurship and Crafts,“ said Mr Novak and announced new invitations for tenders, with allocation of HRK 1.5 billion that will be soon.

Nestlé company representative, Mrs Ivanka Stojnić shared her experience at the conference as well, and through presentation “Nestlé Adriatic – a journey to sustainability” showed measures that were taken so far, as well as global strategy for sustainable development of the company in the following decade:

”Nestlé is the world’s largest food industry and as such takes responsibility to the environment very seriously on the global and the local levels equally. Our Institute of Packaging Sciences has begun with its work two months ago, and it is the first of a kind in the food industry. We have committed to achieve that all our factories will have a zero waste by the next year. This is of the great importance for us and for the region in which Nestlé has two factories. By 2025, 100 % of our packaging will be made of recyclable or reusable materials, and we plan to achieve zero net greenhouse gas emission by 2050. We hope that we will be recognised as a company that actively raises the awareness on the importance of collecting, sorting and recycling of waste and we are a devoted partner to public authorities in protecting nature.”

The conference was concluded with presentations of the experts about the options of the efficient use of the material in the circular economy.

The conference was held within the framework of the Croatian presidency over the EU Strategy for the Danube Region, and on the initiative of the Ministry of the Economy, Entrepreneurship and Crafts as one of the coordinators of the Priority Area of the Danube Strategy. Namely, since 2011, the Ministry of the Economy, Entrepreneurship and Crafts of the Republic of Croatia together with the German Ministry of Economic Affairs, Labour and Housing of Baden-Wuerttemberg, has been continuously coordinating Priority Area 8 “Support to strengthening the economy” aiming to support and enhance competitiveness of the economy in Danube macro-region.

Any cookies that may not be particularly necessary for the website to function and is used specifically to collect user personal data via analytics, ads, other embedded contents are termed as non-necessary cookies. It is mandatory to procure user consent prior to running these cookies on your website.